skip to main | skip to sidebar

Volitalization and the vacuum infusion process

If you've produced a part with vacuum infusion at some point you've probably noticed what appears to be air bubbles in the finished composite. Most likely, what you've seen isn't simply air from the surrounding atmosphere due to a leak in the bag...it's vaporized resin! Understanding the relationship between resin selection, ambient temperature, and vacuum pressure is critical to producing a properly cured part via vacuum infusion.


Recently, Polynova Composites participated in the evaluation of two polyester infusion resins. The test plans called for the production and testing of prototypical solid laminate test coupons wherein the resin system was the only variant. While the resin chemistries were thought to be similar, remarkably one system volatilized to the point of boiling at 24” Hg gauge vacuum (“HgV), whereas the other did so at 27” HgV at room temperature. Since boiling of the resin would result in an unacceptable void content in the final part, and since vacuum pressure plays a critical roll in the infusion process, an investigation was launched to better understand the factors involved. We turned our attention to improving our understanding of the boiling behavior in the context of known characteristics of the resin systems. Thermodynamically, the boiling point of a liquid can be thought of as the disruption of equilibrium between thermal saturation and corresponding pressure saturation where an increase in thermal energy or a decrease in pressure results in a phase change to the vapor state.

We can visualize the phase change as a function of pressure and temperature with the aid of a phase diagram. Figure 1 is a portion of a hypothetical phase diagram, wherein the phase line separates the liquid and vapor phases. The phases are in equilibrium and co-exist with each other at any point on the line. Phase transitions occur at constant temperature and pressure at

If a single point along the phase line for a given liquid is known, such as the absolute boiling point (a.k.a. the boiling point temperature at atmospheric pressure) the curve can be reasonably extrapolated using thermodynamic equations.

Turning now to the resin system evaluation, plugging the potential bad actor compounds that might cause the resin to boil into the proper thermodynamic equations paints an interesting phase co-existence picture.


While we don’t know the specifics of each resin’s backbone, both were believed to be based on isophathalic acid, and both systems contain a fair amount of styrene (~35%). The resin systems differ in the type of initiator specified by the manufacturer, where one specifies methyl ethyl ketone peroxide (MEKP) as the free radical initiator, and the other specifies a 60/40 blend of cumene hydroperoxide (CHP) and MEKP as the free radical initiator. The system that volatilized at the higher pressure (~24” HgV) specified the MEKP, whereas the system with the lower volatilization pressure (~27” HgV) specified the CHP/MEKP blend. 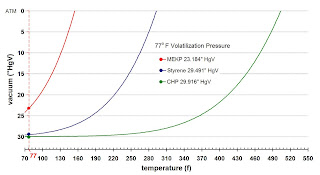 The boiling point pressures at 77 F are of particular interest, where MEKP boils at 23.184” HgV and styrene and CHP boil at 29.451” HgV and 29.916” HgV, respectively. One can fairly conclude from the plots that the use of MEKP significantly influences the onset of boiling.

When we take a closer look at the pressures/temperatures of interest for vacuum infusion processing, as shown in Figure 3, the affect becomes more apparent as the boiling pressure increases to 20” HgV at 95 F, a temperature that is well within the range of exothermic onset for many resin systems. The implication here is that while volatilization may not be visibly evident during the infusion, it will likely become prevalent just prior to resin gel. 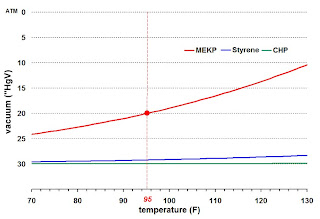 Just how much gas could be evolved? Reviewing the Material Safety Data Sheet for the subject MEKP solution reveals that the actual weight percent methyl ethyl ketone peroxide in the solution is 34%, the rest of the solution being high boiling point components. If we assume a standard 1.5 weight percent addition of the MEKP solution to the resin, our actual MEKP content is 0.51 weight percent. For a 1,000-gram mass of resin, we’re adding 5.1 grams of MEKP. The formula weight of MEKP is ~210, so the mole fraction of the 5.1 grams MEKP added to the 1,000 grams of resin is ~ 0.0242. Using this and the 77 F boiling point pressure for MEKP from Figure 2 (23.184” HgV (gauge)) the ideal gas laws yields a potential of ~ 2.63 liters (160 in3) of evolved gas.

So, does this mean MEKP cannot be used in the infusion process? No. Just how prevalent the evolution of gas is in any given system depends on a number of factors ranging from the resin chemistry and, like the glycol mix in your car’s radiator, its affect on the boiling point of the MEKP, to free radical species evolution and cross-linking during the reaction. Another factor is the selected laminae and its ability to nucleate bubble formation, like Mentos to diet Pepsi. The point, however, remains the same: it doesn’t take very much of a low boiling compound to create a huge void content problem.

A word of caution, while we moved to “pure” CHP as the initiator of choice for the application of interest, as the peroxide plays a critical role in the formation of the thermoset and ultimately it’s physical and mechanical properties, the decision to move to CHP was made under the guidance of the resin manufacturer. Therefore, as you’re thinking about designing and producing your next part, although you’ll clearly benefit from details of this article, don’t be afraid to seek out the wealth of knowledge available from your supply chain.


Posted by Polynova Composites at 8:35 AM